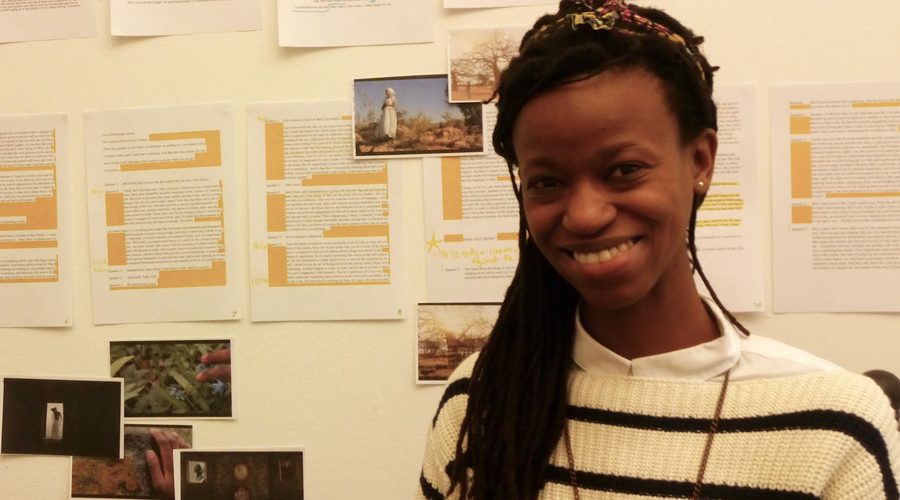 Race and the Psychic Life of Apartheid – Kitso Lelliot

I was born before the end of the state formation that legislated a racist-capitalist system of structural oppression orientated around race. While my early childhood was concurrent with its last days it did not have an immediate hand in shaping my early encounter with the world.

There were whispers of it though; stories that my uncle would regale us with about the metropolis he despaired to for months on end. Stories he would carry back with him form his time spent on, or rather in the Witwatersrand, bringing up the earths wealth to consolidate other mens wealth. There was the time we went on Holliday to Namibia and had to drive through South Africa given the desert that sprawled between my home in Botswana and our destination. Our parents told us to “not mind the looks” that we would probably get on route. Looks that, unbeknownst to us, would be engendered by the arrival of a black woman, a white man, and black and mixed race children in a country where such family configurations were illegal. But shielded by my parents and the fact of childhood itself, any notion of what was unfolding in this country was far beyond any of my imaginings.

My family moved to South Africa a year after the official end of that system of expropriation, dehumanisation and the everyday violence of that affront to peoples ability to forge a life of their making. I was amongst the first cohort of children to attend the new model c schools, the mixed race laboratory that was to become the seed for the rainbow nation.

Two and an half decades later.

I may not have had a direct experience of legislative apartheid, but the reality structured according to its tenets, and those of colonially before it, have remained.

I think what I am trying to point to here, by way of the poetics of memory, is the long reach of apartheid. I am trying to speak to how, though not a directly experienced event in my own life, it has had a profound shaping effect as I’ve endeavoured to move about a life of my own making. The apartheid system and the precedent it found in a broader global colonially that requires cheap, surplus and disposable labour have remained steadfast. Despite their formal dismantling, their scaffolding of an ideological landscape that emptied out certain bodies of their lifeworlds, rendering racialised bodies excess and disposable have persisted. It is a landscape where ones own imaginings that enable a capacity to forge a life in ones own image are confounded and dismembered by (an)other image that obscures you altogether. In an interview around the Fees Must Fall and Rhodes Must Fall protests in South Africa, poet Adrien diff van Wyk said “Going from a place that was predominantly black, you walk into Stellenbosch [a predominantly white space], and you become aware of all these ideas about you, with someone looking at you they have like 1000 ideas about you without necessarily ever speaking to you, because of skin colour”[1].

The work I do functions as a reckoning of sorts, on one hand wrestling with the condition of living in the afterlives of apartheid and the ever-present violence that structure our lives, while on the other, imagining something else. I work through a privileging of embodied knowing, drawing on lived and inherited experience towards a practice of making room, space for those imaginings of this ‘something else’, so they might take hold.

I do this work while I hold on the the understanding that “In this chain and continuum, I am but one link. The story is me, neither me nor mine”(Minh-Ha, 1989, 122).

It is an endeavour to trouble those histories that have shaped our present, in conversation and collaboration with those who came before.

I was invited to engage in a project that entered into a conversation, an exchange of learning, a dance almost, with the legacy of the late Ernest Mancoba. I made a work for the show that sits within my broader project of troubling the historic writ large. The big narrative that would constrict and contort us into a shape we don’t even recognise or erase us altogether.

The show brought together a number of pieces from contemporary artists that in some way resonated with Mancoba’s work. It was  titled “I shall dance In a different society”. The title was taken from a comment made by Mancoba that was found in his personal archive. At a party in Paris he had been asked, as a black man, to show off his dance moves.

Mancoba refused to participate in this caricature of blackness and would not dance at the gathering, stating that he would dance in a different society. He resisted the reductive racialised presumption underlying the notion that black bodies are inherently geared to corporal talents such as dance. Such ideas were something that he challenged in his work and life. In his work, however, movement comes through as an important articulation of an integrated, whole human being where a “spiritual and material integrity” hold. I found this inability to embody in the world something that resonated so significantly in his work and philosophy really affecting. In response to this, I developed a work in which I performatively embodied his paintings, which for me are so much like a dance, by presenting a performance piece drawn from the gestural markings of his later work. In a video piece I performed in front of an image of the studio Mancoba worked in during his time in Paris. This video was then projected onto a sheet of semi translucent fabric hanging just in front of a wallpaper image of this same studio. The projected work became a double/other reality layered on the initial image on the wall. It becomes a visualisation of an other reality alongside the image of the world that restricted him so much. The sheet of fabric that the video is projected onto also echoes the inside of the studio where he worked with his life partner Sonja Ferlov Mancoba. They shared the space and would divide it with a hanging fabric. The fabric remembers the intimacy through which their lives and work unfolded while simultaneously imagining and picturing an other reality where the concept of a unified Being that is free to embody its philosophy and express itself fully is possible.

I shared the earlier fragments from my own memories as a way to enter into a refection on the work I made in relation to the legacy of Mancoba. They are a way to frame the negotiations we are both part of, navigating a world that would deny us. It is a curious thing to move about the days of life, through its textures and moods, with the knowledge of a denial that precedes my every unfolding.

As a strategy of sorts I find myself engaging in a negotiation of appearance, the terms of a process of appearing. Where in Mancoba’s work there is ‘a negotiation, a tension, oscillating between the material and the immaterial, figuration and abstraction’ as the curator of the show Alicia Knock put it, there is a similar negation between presence and absence and this material and the immaterial quality in my own work.

This idea of being “liberated from figuration”[2] as it has been used pertaining to abstraction in art practices takes on particularly heady implications when considered in relation to the overdetermined image of black bodies.

There is often this negotiation between presence and absence of bodies in my work. I grapple with what it is to be rendered invisible non-being. To be rendered spectral within a regime of thought that would miss see me. What is seen is something else other than me. This presence of the not-there-being calls up an image of ghosts, insisting on a language of the spectral that alludes to a simultaneity of absence and presence. I look for a language that can describe presence beyond the parameters of a real shaped by western hegemonies narratives. It is a language for and from spaces beyond the parameters of the real as it is constituted by the violence of the episteme of imperial western knowledge and perception that would dismember me.

The engagement I entered into with Mancoba’s mark making functioned within this realm of a figure negotiating the terms of her appearance, caught between a refusal to be seen otherwise while still insisting on her presence. I return to the intimate, the body, because while there is a violence to carrying those histories in my body, on my skin, it also means that my body is a place I can refigure them from.

Taking the marks into my body and animating them, or being animated by them, takes on these politics of legibility. It is a place where Mancoba’s liberated mark making might liberate the movement of my own body in the world, while those marks he offered linger for a moment in an embodied state. In so doing there is an opening up a space for being beyond the restricted world we otherwise inhabit. The possibility emerges in this space between, material and immaterial, abstraction and legibility as well as between those that a came before and us in our now time.

I often think of my work in these terms, of a conversation with those stories that shape us, that which came before as what ‘lies before’. I take history as that which lies before in a sense evoked by Fred Moten and that echoes the idea of Sankofa, where, as Moten puts it “before indicates both what precedes and what awaits”[3], charging any time of the now “with a fierce urgency”.

I do this work alongside, in learning and in collaboration with those who came before, and alongside my contemporaries who are also committed to imagining routes to a more liveable world.

2E77NRB Archbishop Desmond Tutu holds aloft a football as he addresses crowds attending the 2006 Homeless Soccer World Cup in Cape Town, September 29, 2006. The annual tournament, now in its fourth year and ending on Saturday, has brought together 500 players from 48 countries in a project aimed at helping homeless people turn their lives around. REUTERSMike Hutchings (SOUTH AFRICA)