Ali Ridha Khan is the Coordinator at the Southern African-Nordic Centre (SANORD). In addition, Khan is a Masters student in Political Studies at the University of the Western Cape (UWC), an Andrew W. Mellon Masters Flagship Fellow at the CHR, and a 2021 Rhodes Scholarship Finalist.

Khan’s Masters research investigates the relationship between Gross Domestic Product (GDP) and Gross National Happiness (GNH), critiquing classical and contemporary notions of happiness and political-economy, in addition to paying attention to the human condition, taking the City of Cape Town his subject. The project aims to ask critical questions about happiness and well-being within discourses on political theory and philosophy: “what does a politics of happiness look like?” and “whose happiness, or ideas, of happiness are we consenting to?” Ali Ridha takes a keen interest in questions and critiques of neo-colonialism, neoliberalism, and affect. His research focuses on rethinking political theory and philosophy by combining affect, emotion and aesthetics as to ask questions around the happiness and well-being through a periodical conditioning of the human.

He holds a BA (Political Studies and Environmental and Sustainability Studies, minoring in Sociology) as well as a BA (Hons) in Political Studies from UWC.  Ali Ridha has written several articles for the Huffington Post and made his debut in the Muslim Views, tackling a story of Apartheids ‘Unsung Heroes’. After making his debut in online and print media, Ali Ridha was awarded the prestigious Mellon Mays Undergraduate Fellowship (MMUF) in 2017 and graduating into the Social Science Research Council – Mellon Mays Graduate Initiative Program (SSRC- MMGIP) in 2019.  At an honours level, Ali Ridha was awarded a Centre for Humanities Research Honours fellowship too. He is also the co-founder of Drommedaris, a South African production company, whom launched their first documentary series Voting Blind in May 2019. As part of his professional and academic development as a scholar identified on the next generation pipeline, the CHR has afforded him the role as social media and website content manager. Khan is presently co-editing a book titled Biko and Neoliberalism, and co-writing a book focused on questions of transnational violence, and working on two documentary films. Ali Ridha hopes to complete his MA in 2022. 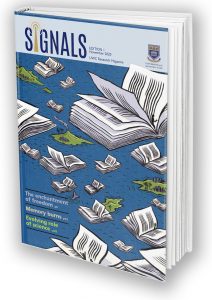